When the coronavirus global pandemic hit last year, one of the industries that benefited from the world staying in lockdown is the commercial real estate spaces. This sector's growth focuses on warehouse demand due to the increased online shopping of people staying at home.

But as the health crisis continues, the commercial real estate found a new demand in terms of production sets. Now that people stayed at home most of the time and are glued to television and smartphones, the appetite for streamed entertainment and original content is also on the roll.

The demand for new and original shows resulted in the need for more high-quality soundstages, creative labs, production offices, and T.V. studios.

A recent MarketWatch report states that Hollywood has already been running out of studio spaces even before the pandemic. But the demand doubled as viewers are looking forward to seeing fresh streamed entertainment, which according to the commercial real estate firm CBRE Americas Research increased by 74%.

Because of this, streaming giants like Netflix, Amazon, Disney+, and Hulu are racing to produce original programs.

In the past, media companies would only rent soundstages as needed, but Netflix recently signed a multi-year lease to studios to keep their production in full swing despite the pandemic. According to MarketWatch, rival streaming companies follow Netflix's move, resulting in higher demand for commercial real estate.

This is good news for the commercial real estate escort as building soundstages are five-time more than constructing a distribution warehouse for e-commerce needs.

According to data from Variety Intelligence Platform, after spending roughly $121 billion in 2019, U.S. media companies plan to increase the production budget to produce original content dramatically.

Because of this, Los Angeles and other filming hubs are hoping to double the production and keep up with the backlogs halted by the COVID-19 pandemic last year.

"California's ability to bring production back after shutdowns from COVID-19 has resulted in fast-impact expenditures that have helped quick-start the economy," she added.

Bell also confirmed that television and movie productions have ramped up in the state during summer, fall, and winter, after placing new health and safety protocols for productions. 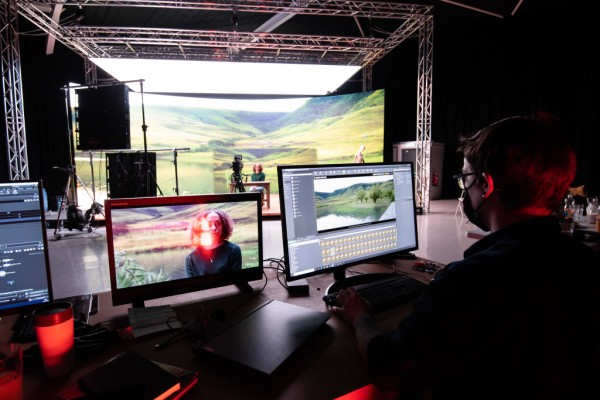 A proof that the T.V. studios are booming is after real estate giant Blackstone acquired a 49% stake in Hudson Pacific Properties' Sunset Studios - one of Hollywood's largest studio operations.

Part of the deal is a 2.2 million square feet of studio space and a nearby office worth $1.65 billion, alongside the rights to build another 1.1 million-square-foot three-studio complex.

Private equity firm's head of real estate, Nadeem Meghji, said that studio space ownership for film, television, and digital content is one of their highest-conviction themes these days.

"Fundamentally, this is a real estate play and critical infrastructure for the production of T.V. shows and film," Meghji told MarketWatch.

"We think we are uniquely positioned to grow our studio footprint, both in L.A. and a small handful of markets in the U.S. and globally," she added.