Building a football stadium is essential for every university which has teams competing with in different divisions regularly. Aside from giving the team a special place to train and further improve their skills, having a home court will also give athletes an extra boost to work hard and play harder to raise the school's banner.

Just recently, the University of South Florida released a feasibility study that contains the estimated cost if the school built a football stadium on its Tampa campus. The university said that the preliminary research is only the first in several steps in evaluating whether to build a stadium or not.

The study first assesses the financial feasibility of building the football stadium. The initial research found the university would need a whopping $200 million to build a 40,000 to 50,000-seater football stadium. But it stressed that other factors could affect the construction, which may result in modification of the final amount needed.

Currently, the University of South Florida's football team plays its home games in Raymond James Stadium, the NFL's Tampa Bay Buccaneers' home court. South Florida team will continue to play at Raymond James as they signed a six-year lease agreement earlier this year. This deal continues the university team's partnership with the Tampa Sports Authority and the Tampa Bay Buccaneers.

The initial study proposes two sites on the campus where it is possible to build a football stadium. Each location was surveyed with factors in minds such as existing land use, infrastructure, access to major streets, parking availability, and campus connectivity. 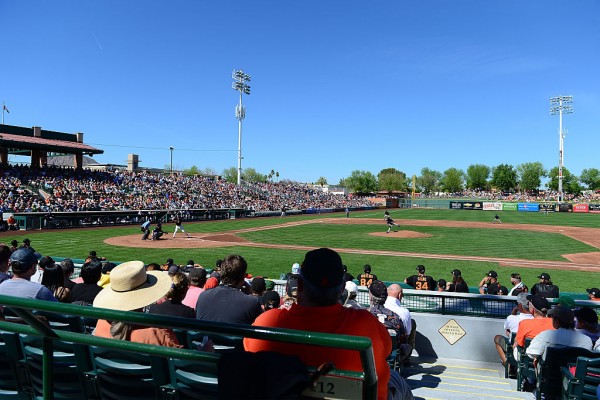 (Photo : Getty Images/Jennifer Stewart)
General view of the spring training game between the Colorado Rockies and the San Francisco Giants at Scottsdale Stadium on March 9, 2016 in Scottsdale, Arizona.

While the University of South Florida is still in the initial stage of the possibility of building a football stadium, San Francisco City is already on its way to getting a soccer field they could call their own.

For the past 120-years, no city club has had its soccer stadium, but that will historically change next July when San Francisco Glens plays at their newly built soccer-specific stadium on Treasure Island.

The new soccer stadium features locker rooms, concessions, a press box, meeting rooms, storage, and a study hall room for academy players to use on or before training.

"It made a lot of sense for us considering how much money we're putting into renting fields and to alleviate those costs and put them into something that we can control," he added.