Victorian Home For Sale at Only $325K. The Catch? It's a Former Funeral Home

If you are a potential homebuyer looking to spice up your life by looking for some spooky adventures, then this historic Victorian house in New York is the perfect match for you.

This massive property located in Plattsburgh is now the source of intrigue by some real estate listing enthusiasts due to its dark and creepy past. According to realtor.com, the house is now up in the market for only $325,000. This price tag comes with an exciting plot twist: the massive Victorian house is a former funeral home.

Based on the property listing, the 5,860 square-foot property was built in 1895. It was initially created for bank president Alfred Guibord, who also died in the same house in 1908. During his family's time in the Victorian house, Guibord's wife maximized the large house by entertaining family, friends, and guests.

It boasts nine-bedrooms, an additional seasonal attic room, and three and a half toilets and bath. The northern wing features three bedrooms, a bathroom, and a small kitchen, which became a home for some tenants in the past. Upstairs also lies the master bedroom, which is also a series of several rooms.

"It has pocket doors that lead to a sitting area and then a bathroom," Perrone said, adding that the central kitchen could be found at the back of the house, near the elevator.

The entire Victorian house is also filled with vintage wallpaper, which Perrone considered a gorgeous touch to the house's rich history. 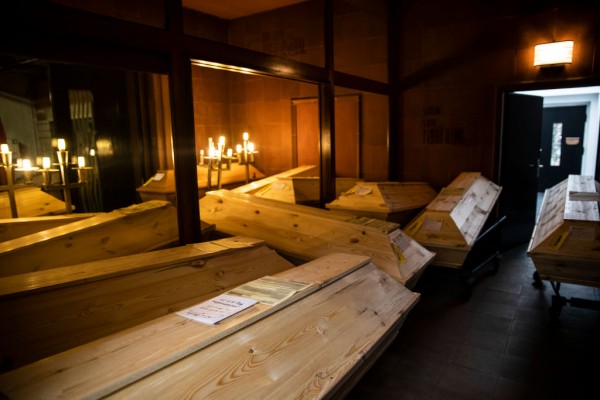 Despite being around for more than a century, the previous owners have maintained its original vintage details-Yup, including the former funeral home's basement embalming room.

According to listing agent Katie Perrone, the funeral home ceased operation in 2001, but some features and equipment used in the "dead business" are still lounging on the property.

"The casket lift is still there and goes down to the basement, where they would prep the bodies. It still has that funeral-home feel when you're in the basement, Perrone explained.

Taking the listing photos also became a challenge as the photographer felt that creepy vibes in the house, especially at the former basement embalming room.

"The photographer that I use went down to the basement. She was so freaked out that I walked ahead of her," Perrone shared.

"She refused to go down all the way in the back the first time. The second time, I said, 'You know obviously I want to take a photo of that room, so let's go in there,' On our way back up, she was walking backward because she swore that there was something following us," she added.

Aside from being a former funeral home, this New York house for sale also once served as a bed-and-breakfast.

"The guys that own it now actually used it for a bed-and-breakfast called the Hummingbird House," Perrone revealed.

The listing agent said that this historic Victorian house is surely not for someone looking for a contemporary vibe but someone who could embrace its rich history more than the eerie vibes.

"It has to be somebody that isn't looking for the contemporary sleek look. Someone who's looking for the history and the charm and the wood and a home that's never going to be built again. No one's going to go and replicate this home," Perrone said.

READ MORE: $5.5 Million Floating Mansion in Miami is the Luxury Real Estate of Your Dreams